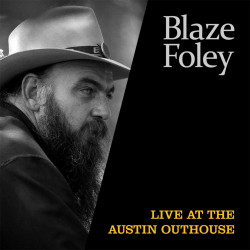 Foley was born Michael David Fuller in Malvern, Arkansas on December 18, 1949. He grew up in San Antonio, Texas and performed in a gospel band called The Singing Fuller Family with his mother, brother, and sisters. As a child, Blaze contracted polio, and as a consequence, one of his legs was shorter than the other, causing him to drag his foot while walking. He was nicknamed "Deputy Dawg" early in his career. In the spring of 1975, he was living in a small artists' community just outside Whitesburg, Georgia when he met Sybil Rosen. Rosen and Foley were in a relationship and decided to leave the artist community together to support his music. He went on the road and performed in Atlanta, Chicago, Houston, and, finally, Austin, Texas. Together, they ended up in Austin. Foley tried to get into songwriting, but after the move, he experienced a lot of career pressure. Foley started drinking more and the bar scene complicated his relationship with Rosen, which eventually ended.

Foley was close friends with Townes Van Zandt and was greatly influenced by him. Foley's stage name was inspired by his admiration of musician Red Foley and the stripper and burlesque performer Blaze Starr.

The master tapes from his first studio album were confiscated by the DEA when the executive producer was caught in a drug bust. Another studio album disappeared when the master copies were stolen with his belongings from a station wagon that Foley had been given and lived in.  A third studio album, Wanted More Dead Than Alive, was thought to have disappeared until, many years after Blaze died, a friend who was cleaning out his car discovered what sounded like the Bee Creek recording sessions on which he and other musicians had performed. This was Foley's last studio album, and he was scheduled to tour the UK with Townes Van Zandt in support of the album. When Foley died, his attorney immediately nullified the recording contract and the master tapes subsequently disappeared (reportedly lost in a flood).

On February 1, 1989, Foley was at a house in the Bouldin Creek neighborhood of Austin, Texas when he was shot in the chest and killed by Carey January, the son of Foley's friend Concho January. Foley had confronted Carey January accusing him of stealing his father's veteran pension and welfare checks. Carey January was acquitted of first-degree murder by reason of self-defense. He and his father presented completely different versions of the shooting at trial. Concho January, who has since died, liked to drink and proved an unreliable witness even though he tried to testify against his son.

At his funeral, Foley's casket was coated with duct tape by his friends. Townes Van Zandt told a story where he and his musicians went to Foley's grave to dig up his body because they wanted the pawn ticket that Foley had for Townes' guitar.