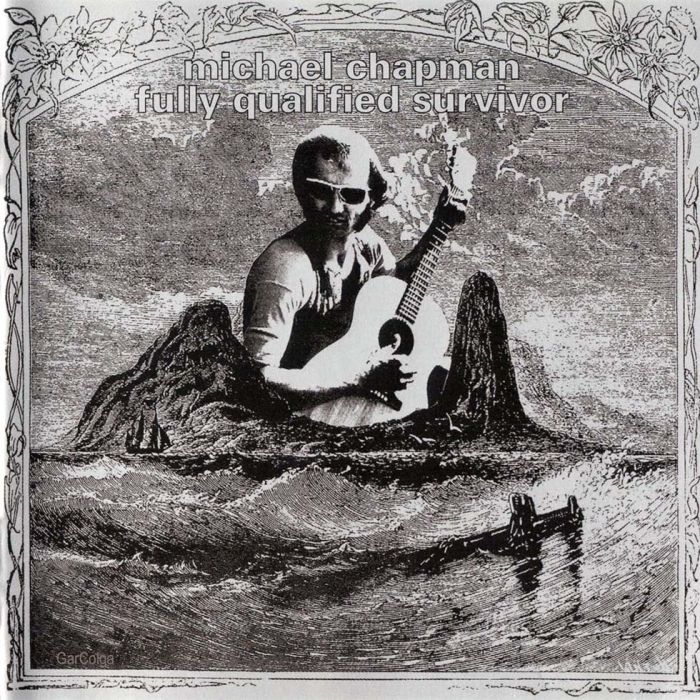 Michael Chapman (24 January 1941 – 10 September 2021) was an English singer-songwriter, and virtuosic guitar player. Chapman originally began playing guitar with jazz bands, mainly in his home town of Leeds in the West Riding of Yorkshire. He became well known in the folk clubs of the late 1960s, as well as on the 'progressive' music scene, and released over 50 albums.

In 2016, Chapman celebrated fifty years as a professional musician. Towards the end of his life he still played professionally and regularly toured in the UK, Europe and US.

Chapman was born in Hunslet, Leeds, Yorkshire, England. He attended art college in Leeds and then worked as an art and photography teacher at Bolton College, Lancashire. At the time he was playing mostly jazz guitar standards as he was heavily influenced by American jazz performers. Listening to other English guitar players such as Ralph McTell, Chapman evolved his own distinctive style of playing incorporating jazz, folk & ragtime stylings.

He first appeared on the London and Cornwall folk music circuits in 1967, including the Piper's Folk Club in Penzance, alongside John Martyn and Roy Harper. His first album was Rainmaker in 1969. The producer was Gus Dudgeon who also produced records by Elton John, David Bowie, Steeleye Span and many others. Rainmaker was released on the EMI progressive label Harvest, and Chapman played the folk and progressive circuits during the festivals of the early 1970s, with Mick Ronson, Rick Kemp and Keef Hartley.

While living in Kingston upon Hull, Chapman recorded a further three albums for Harvest. Fully Qualified Survivor, again produced by Gus Dudgeon with lush strings arranged by Paul Buckmaster, received much critical acclaim from the likes of BBC Radio 1 DJ John Peel, and contained his best-known track, "Postcards of Scarborough". Window and Wrecked Again followed, the latter being Chapman's attempt at a Memphis album. Brass arrangements featured on biographical tracks like "Shuffleboat River Farewell" and the title track. After a tour of the United States with Rick Kemp, Chapman signed to Decca's subsidiary, Deram, recording an increasingly rockier set of albums. Championed by Charles Shaar Murray and John Peel, he retained a high profile, a lively draw on the college circuit in the UK and across mainland Europe.

The record producer Don Nix worked on the album Savage Amusement, which included several songs from the past. Chapman and Kemp used the album's title for a band in the mid 1980s. 1977 saw the end of Chapman's Decca deal, and the beginning of an association with Criminal Records in 1978 and the two labels produced versions of The Man Who Hated Mornings. Chapman released a record of guitar instruction, and continued giving concerts and recording in a variety of styles and with varying formations.

Chapman then started a period of prolific recording activity, recording for numerous smaller record labels, and playing the folk and club circuits. The 1980s was a quieter time for Chapman. He continued to make recordings that straddled musical genres and pushed his guitar playing to the fore, but had neither the profile nor sales of the previous decade.

Chapman performing on 21 March 1980 in Belgrade, Yugoslavia (Serbia)
The late 1990s onwards represented a period of continued rebirth for Chapman. He embraced the "elder statesman" role and enjoyed critical acclaim for albums like Navigation, Dreaming Out Loud and Still Making Rain (a wry pun title that looked back to his debut album). Chapman released albums about every two years, receiving praise but without great sales, ending with the 1997 release Dreaming Out Loud. Bands like Supergrass acknowledged Chapman's material and playing as a formative influence.

The new century saw Chapman exploring his guitar player roots and releasing instrumental albums alongside his song-based sets. Americana and Words Fail Me feature soundscapes that recalled travels in America, and featured a dexterity and inventiveness on the guitar equal to the classic Harvest and Decca periods.

In February 2008, he hosted a charity dinner/auction where a limited edition Vanity and Pride was released featuring Ursa who added her own contribution to Chapman's music.

Chapman's back catalogue for Harvest has been re-released by US based label Light in the Attic in both heavyweight vinyl and CD formats. He also recorded several instrumental albums for Tompkins Square Records, including Fish in 2015.

His website stated: "I had an art college education and on a rainy night in 1966 I went into a pub in Cornwall, but I couldn't afford to pay to go in. So I said, I'll tell you what, I don't want to stay outside in the rain, I'll play guitar for half an hour for you. They offered me a job for the rest of the summer and I've been at it ever since."