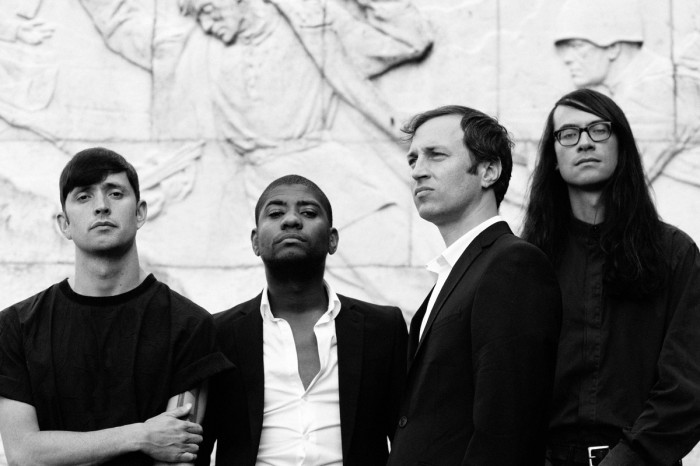 Algiers
A favorite of
Darren Farnsworth

Algiers is an American rock band from Atlanta, Georgia formed in 2012. The band consists of multi-instrumentalists Franklin James Fisher, Ryan Mahan, Lee Tesche, and Matt Tong. Algiers pulls from a…

Algiers is an American rock band from Atlanta, Georgia formed in 2012. The band consists of multi-instrumentalists Franklin James Fisher, Ryan Mahan, Lee Tesche, and Matt Tong. Algiers pulls from a divergent number of musical (and nonmusical) influences; the most notable of which being post-punk, gospel, Southern Gothic literature, Hip hop, and the concept of the Other. Their sound has been described as dystopian soul due to its somber mood, afrofolk inspired vocal approach, and heavy emphasis on atonal textures.

History
Fisher, Mahan, and Tesche met and grew up playing music together in Atlanta, Georgia but officially formed in London in 2012 with the release of their first single. They chose the name Algiers in reference to a key historical site of anti-colonial struggle, symbolizing a contested space where violence, racism, resistance, and religion commingle.

The group released their first single “Blood” in January 2012 via Atlanta based label Double Phantom. Byron Coley for The Wire wrote “Although the fusion may have been touched upon in recordings related to both The Birthday Party and The Gun Club, Algiers are dedicated to grafting gospel music onto post-punk guitar-cuzz...this record is mesmerising and really sucks you in with its weird power.”

The band's self-titled debut album was released through Matador on June 2, 2015. Ahead of their eponymous release, the band opened for Interpol, during their North American Tour. Matt Tong, formerly of Bloc Party, began playing drums for Algiers at this time.

In the spring of the following year, the band premiered and toured the Eastern US screening the sixth installment of Brendan Canty of Fugazi and Christoph Green’s Burn to Shine film series. Burn to Shine Atlanta was curated by Lee Tesche of Algiers and filmed in the summer of 2007. This was followed by a live installation with renowned Japanese flower artist Makoto Azuma that saw the band performing in the Californian desert underneath a palm tree suspended in mid air.

On June 23, 2017, Algiers released their second studio album, The Underside of Power. The album was produced by Adrian Utley of Portishead and Ali Chant and mixed by Randall Dunn. This coincided with a European stadium tour that found the band opening up for Depeche Mode and remixing the lead single from their Spirit album. At the same time, it was revealed that Algiers had also been working in the studio with Massive Attack and were releasing an experimental tape and zine series. Much of 2018 saw the band on the road with Young Fathers, a DIY tour with Downtown Boys, and a special set at the Black Cat 25th anniversary party.

Their live show has been described as "recalling at various points PIL’s dub-style expansions, Afrobeat, industrial, no wave, free jazz, Suicide, the XTC of “Travels in Nihilon,” Nick Cave’s fire and brimstone, and musique concrète."