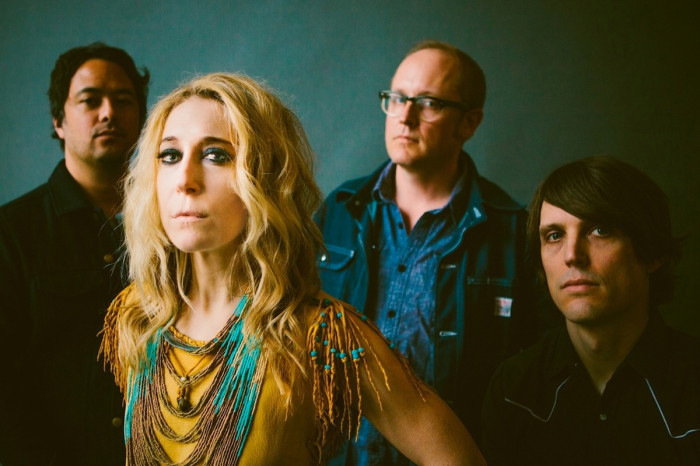 Heartless Bastards are an American rock band formed in Cincinnati, Ohio in 2003.

Heartless Bastards are an American rock band formed in Cincinnati, Ohio in 2003.

Heartless Bastards originally started as a recording project of Erika Wennerstrom. Erika played most of the instruments and featured David Colvin on drums, along with contributions from Reuben Glaser on lead guitar and Jesse Ebaugh on bass. The 5-song demo was recorded in December 2002 at Ultrasuede Studios by Shannon McGee. Erika put together a live band and played the first live show at The Comet, a bar in the Cincinnati community of Northside, in August 2003. The live line up came to be a three-piece with Kevin Vaughn on drums and Mike Lamping on bass. The band was signed to Fat Possum Records in 2004 after Patrick Carney from The Black Keys passed along a demo he received from Erika.

Rolling Stone reviewed their debut album Stairs and Elevators and said, "the Heartless Bastards are a small-town band who are ready to show the big city no mercy". The Village Voice wrote: "deadeye accurate in pitch and message... what we've got is a hard, gnarled voice singing simple-seeming melodies that feel archetypal rather than ordinary, which is no easier to explain than it is to do". Stylus gave the group high praise, stating, "(Erika Wennerstrom) and her two band mates have created an album with more rocking songs and fat hooks than most bands can dream of. It’s not just that they rock, it’s that you believe what you hear, that they love the sound they make, that Wennerstrom lays her soul bare in her lyrics without sounding like Sarah McLachlan, that the women of rock who labored to make it OK for a girl to dream of playing guitar deserve far better than Avril Lavigne or Kelly Osbourne as their descendants."

The second full-length album from the band, All This Time, was released on August 8, 2006. The band road tested many of the tracks on the record prior to releasing it and received rave reviews from audiences. The album relies less on guitar riffs and belted vocals and more on musicianship, without leaving behind the group's unique sound. On the modern rock station WOXY, the band was ranked No. 12 on the 97 Best of 2005, putting the band among the likes of Spoon and ahead of blues rockers The White Stripes.

According to Wennerstrom, the name of the band comes from a question on a Mega Touch trivia quiz game at a bar. A question asked the name of Tom Petty's backing band, and one of the options was "Tom Petty and the Heartless Bastards". She thought it was funny, and used it when she later formed a band.

In August 2008, a new line-up for the band was announced. Erika Wennerstrom remains the only constant member, rejoined by bassist Jesse Ebaugh and original Heartless Bastards drummer Dave Colvin.

Their third album The Mountain was released February 3, 2009 on Fat Possum Records and was produced by Spoon producer Mike McCarthy. For this album the band broadened their sound to include elements of country music, employing violin, banjo, mandolin, and steel guitar.

Heartless Bastards performed a taping for the PBS series Austin City Limits on June 3, 2009 as part of the show's 35th anniversary season. In October and November 2009 the band opened for Wolfmother during the band's American tour.