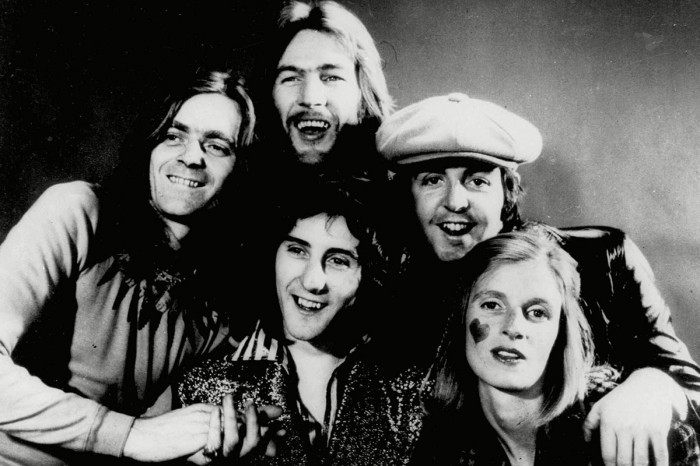 Paul McCartney and Wings
A favorite of
Darren Farnsworth

Paul McCartney and Wings (also known by their original name Wings) were a British-American rock band formed in 1971 by former Beatle Paul McCartney, his wife Linda on keyboards, session drummer Denny Seiwell, and former Moody Blues guitarist Denny Laine. Wings were noted for frequent personnel changes along with their commercial successes, going through three lead guitarists and four drummers. However, the core trio of the McCartneys and Laine remained intact throughout the group's existence.

Created following the McCartneys' 1971 album Ram, the band's first two albums, Wild Life (1971) and Red Rose Speedway (1973) (the latter featuring guitarist Henry McCullough), were viewed as artistic disappointments beside Paul's work with the Beatles. After the release of the title track of the James Bond movie Live and Let Die, McCullough and Seiwell resigned from the band. The McCartneys and Laine then released 1973's Band on the Run, a commercial and critical success that spawned two top ten singles in "Jet" and the title track. Following that album, the band recruited guitarist Jimmy McCulloch and drummer Geoff Britton, only for Britton to quit shortly afterwards and be replaced by Joe English. With the new line-up, Wings released 1975's Venus and Mars, which included the US number one single "Listen to What the Man Said", and undertook a highly successful world tour over 1975–76. Intended as more of a group effort, Wings at the Speed of Sound (1976) was issued midway through the tour and featured the hit singles "Silly Love Songs" and "Let 'Em In".

In 1977, the band earned their only UK number one single, with "Mull of Kintyre", which became the then-best-selling UK single in history. Wings experienced another line-up shuffle, however, with both McCulloch and English departing before the release of the group's 1978 album London Town. The McCartneys and Laine again added new members, recruiting guitarist Laurence Juber and drummer Steve Holley. The resulting album, Back to the Egg, was a relative flop, with its singles under-performing and the critical reception negative. During the supporting tour, Paul was arrested in Japan for cannabis possession, putting the band on hold. Despite a final US number one with a live-recorded version of "Coming Up" (1979), after Laine departed from the band, Wings discontinued for good in 1981.