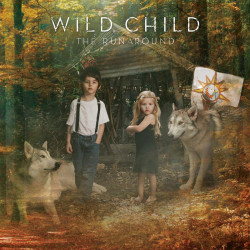 Wilson and Beggins met while touring as back-up musicians for a Danish indie act called The Migrant. They began writing songs together in the backseat of the tour van and found they worked very well as a songwriting team. Both had just been through the end of relationships, which provided both common ground and writing material. Beggins had brought a ukulele from his father's instrument collection simply because it was small enough to comfortably pass around in a van (Beggins played accordion with The Migrant). By the end of the tour the two had written several songs and began recording their first album upon their return to Austin. To complete the sound they were seeking, they called in other local musicians and friends to help record, which eventually became the full Wild Child band.

Their self-recorded first album, the 15-track Pillow Talk, was released on October 25, 2011 (with help from San Francisco producers Evan Magers and Alex Peterson, and mastered by Erik Wofford). The album was received positively on many blogs and yielded a number one single on the music promotion site The Hype Machine.

Their second album, The Runaround, was released on October 8, 2013 via The Noise Company and produced by Ben Kweller. Kweller liked the band's debut album and sought out the band seeking to produce their sophomore effort. The album was funded in part through a successful Kickstarter campaign which raised over $40,000. It was recorded in January 2013.

The first single from the album, "Crazy Bird", was received extremely positively, reaching number one on the music promotion site The Hype Machine, debuting number one the FMBQ SubModern/Specialty charts, and being featured on World Cafe. Reviews for the album were positive, including a rating of 8/10 from PopMatters. The song "Living Tree" was named in the 'Top Ten Songs of 2013' by NPR.