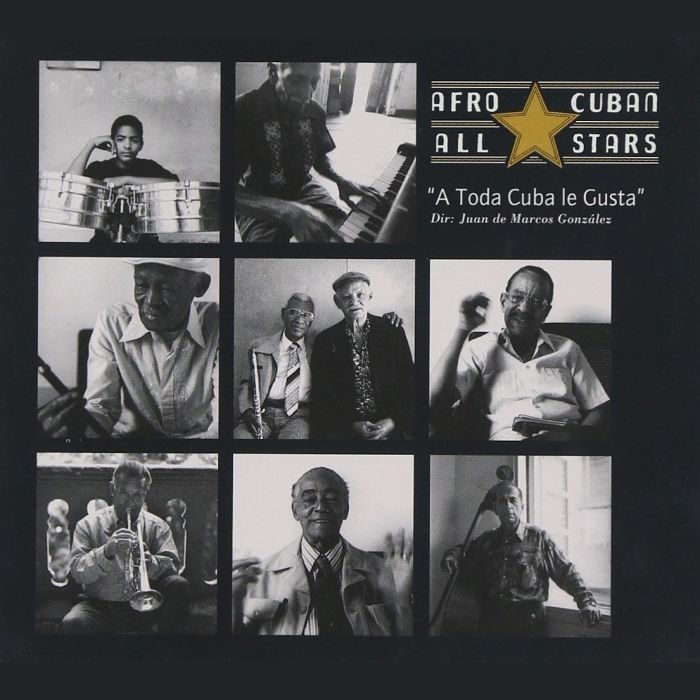 By Afro-Cuban All Stars

Afro-Cuban All Stars is a Cuban band led by Juan de Marcos González (formerly tres player for Sierra Maestra). Their music is a mix of all the styles of Cuban music, including bolero, chachachá, salsa,…

Afro-Cuban All Stars is a Cuban band led by Juan de Marcos González (formerly tres player for Sierra Maestra). Their music is a mix of all the styles of Cuban music, including bolero, chachachá, salsa, son montuno, timba, guajira, danzón, rumba and abakua.

So, in March 1996, Gold and Juan de Marcos González (previously the tres player of Sierra Maestra) produced A Toda Cuba le Gusta, the first album by the Afro-Cuban All Stars, recorded at the EGREM Studios in Havana and featuring Rubén González (piano), Orlando "Cachaíto" López (bass), along with a big band of veteran Cuban musicians and singers, most of whom had careers that went back to the 1950s Havana scene: Ibrahim Ferrer, Pío Leyva, Manuel 'Puntillita' Licea, Raúl Planas, Félix Baloy, and José Antonio "Maceo" Rodríguez. Cooder also played slide guitar on one track, "Alto Songo". In the sleeve notes, de Marcos González, who directed the project and played tres, wrote: "This album is dedicated to Rubén González, genius of Cuban piano".

During follow-on sessions also held at EGREM Studios in March 1996, Cooder then produced the Grammy winning Buena Vista Social Club, featuring Rubén González (piano), Compay Segundo, Ibrahim Ferrer, Omara Portuondo and Eliades Ochoa, supported by much of the same band that had recorded the Afro-Cuban All Stars album, and with Juan de Marcos González now acting as A & R Consultant. Cooder played guitars on all but one track.

Finally, in April 1996 and using left over studio time after the sessions that had produced the previous two albums, the solo album Introducing...Rubén González was recorded in just two days, live with no overdubs. On the album's outer cover, Cooder is quoted as saying: "The greatest piano soloist I have ever heard in my entire life. A Cuban cross between Thelonious Monk and Felix the Cat".