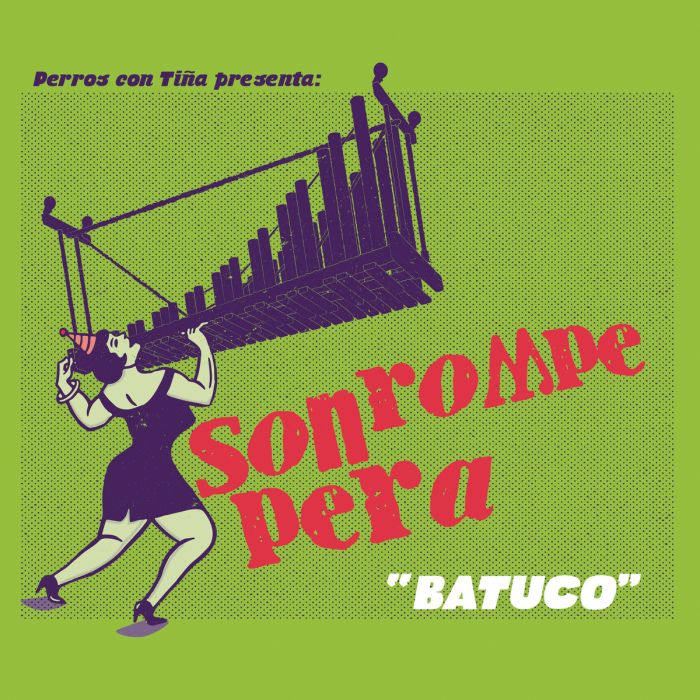 Born and raised in the deep outskirts of Mexico City, the Gama brothers are keeping alive the rich legacy of marimba music running through their family with their latest project, Son Rompe Pera. While…

Born and raised in the deep outskirts of Mexico City, the Gama brothers are keeping alive the rich legacy of marimba music running through their family with their latest project, Son Rompe Pera. While firmly rooted in the tradition of this historic instrument, their fresh take on the folk icon challenges its limits as never before, moving it into the garage/punk world of urban misfits and firmly planting it in the 21st century.

Originally performing alongside their father at local events as kids, they now find themselves at the forefront of the contemporary international cumbia scene with their sonic explorations of the classic marimba. Their absolutely unique blend comes from a typical youthful rebellion, when as teenagers they left behind their upbringing and began to play in various punk, rockabilly and ska bands. Now they’ve gone full circle with the return of the marimba on lead, and mixing all of their influences together with an energetic take on the popular instrument, giving it a new twist never before seen in Mexican folk music.

Their live shows are a sweaty mess of dancing fans, and this garage-cumbia-marimba-punk band (the only band of its kind in the world) never disappoints on stage. Their authenticity shines through as they give their modern interpretation of Mexican, Peruvian, and Colombian classics, as well as their own original material and some surprise covers. The contrast of the traditional marimba with their youthful attitude and street sense connects the audience to the past while dancing into the future.

Formed in 2017, Son Rompe Pera broke onto the potent cumbia scene of today as the marimba duo of brothers Jesús Ángel and Allan Gama (Kacho and Mongo), who inherited this tradition from their father, Batuco. A marimba player by trade, he taught them to play and understand the marimba, which they first used to revive old folk songs for their friends, family, and passers-by on the street. They then incorporated it into the performance of popular Mexican cumbia songs, while spicing things up with an animated identity of their own, creating rhythms of an imaginary repertoire that grows, spreads, and connects the Americas with every passing year.

Son Rompe Pera is currently made up of five musicians, (conga, percussion, güiro, drums, guitar, bass and marimba) who develop a full live sound with strong Pan-Latino representation. After a chance meeting in the La Lagunilla market in Mexico City, they were invited to Chile in 2017, where they played over forty gigs at some of the biggest festivals in the country, while also spending weekends at the famous Persa Bio-Bio street market, keeping alive their legacy as street musicians wherever they went. The band also grabbed the attention of major musicians working in this style, such as Café

In Chile they also took advantage of staying at the mythical Perros con Tiña studio, where they continued to develop their sound and were able to record their first record, loaded with famous guests from the current Chilean music scene. The album, Batuco, due out on the ZZK label imprint, AYA Records, on February 28th, 2020, is named after their recently deceased father, and is a representation of everything he taught them growing up, plus their first steps into a new, international career.

In their own words: “The basics of Son Rompe Pera have been developing since we were kids, and the music and streets are in our blood. We found the markets flooded with old, forgotten folk music, and so as kids we decided to carry the marimba with us and create this musical project from our own roots, mixing in rhythms which we thought would never be musical brothers, like cumbia, punk, and the sounds of our barrios and our everyday lives.”

The marimba is an idiophone percussion instrument, similar in form to a xylophone. Xylophones are widely used in central and western African music, and were taken to Latin America during the conquest and colonization. The term marimba comes from the Bantu marimba or malimba. The word is formed from ma, or “many”, and rimba “single-bar xylophone.” It consists of a series of wooden strips of different sizes, arranged from largest to smallest, which are struck with mallets to produce musical notes. Each key has its own resonator and the instrument as a whole is fixed into a frame with legs. 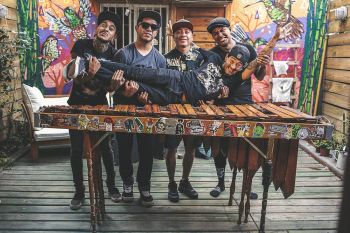 Are you enjoying “Pájaro Cenzontle” by Son Rompe Pera?