'It's Not Just Me, It's Everybody'
by Weyes Blood 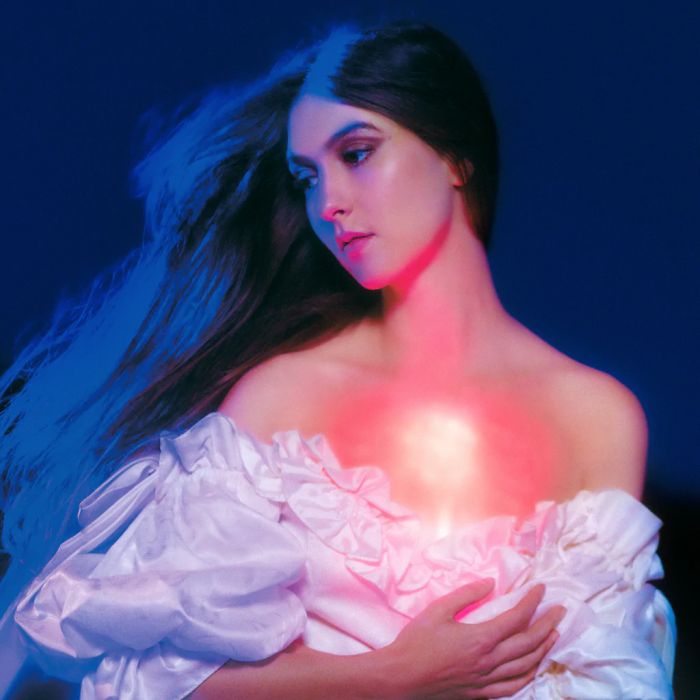 Natalie Laura Mering (born June 11, 1988), known professionally as Weyes Blood (pronounced /waɪzblʌd/), is an American singer, songwriter, and musician. She was primarily raised in Doylestown, Pennsylvania. She has been performing her own material under variations of the name Weyes Blood since 2003.

Her music has undergone significant changes throughout her career. She has been involved in the underground noise music scene and was briefly bassist of the Portland, Oregon-based group Jackie-O Motherfucker and was singer for the band Satanized. As Weyes Bluhd she made two self-released albums, changing to Weyes Blood to release The Outside Room (2011) on microlabel Not Not Fun Records. She then signed with independent label Mexican Summer, releasing The Innocents (2014) and Front Row Seat to Earth (2016). She released her latest studio album, Titanic Rising (2019) on Sub Pop, to critical acclaim.

Natalie Laura Mering was born on June 11, 1988 in Santa Monica, California, into a deeply religious born again Pentecostal Christian family. Commenting on her upbringing, Mering said: "I was raised in a real spiritual, Bible Belt household. So I developed my own cynicism because there are always things in the Bible that really bum me out.... I became really obsessed with the Kids in the Hall as a kid, and they had Scott Thompson, who's like the one gay member. I remember having this feeling that 'Oh, Scott Thompson isn't going to heaven? How could that be?' That was my first big tipoff that something wasn't quite right with dogmatic Christianity. And then I was just trying to undo it at the age of 12."

Mering's family moved several times throughout her childhood; she spent her early life in Scotts Valley, California before they settled in Doylestown, Pennsylvania in 1999, where she attended high school. Both her older brothers and parents are musicians and music played an important part in her upbringing. Her father, Sumner Mering, is a musician and guitarist who was in a Los Angeles new wave band entitled Sumner in the late 1970s.