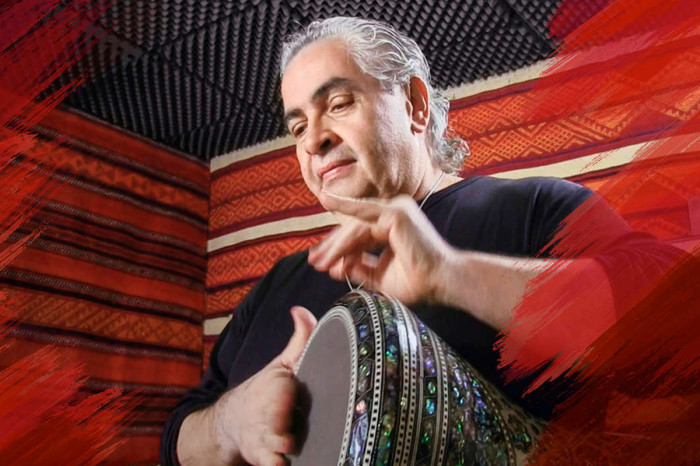 Hossam Ramzy (Arabic: حسام رمزي‎; born in Cairo, Egypt) is an Egyptian percussionist and composer. He has worked with Western artists like Jimmy Page and Robert Plant as well as with Arabic music artists…

Hossam Ramzy (Arabic: حسام رمزي‎; born in Cairo, Egypt) is an Egyptian percussionist and composer. He has worked with Western artists like Jimmy Page and Robert Plant as well as with Arabic music artists like Rachid Taha and Khaled.

Ramzy was born into a wealthy Cairo family. He began playing the darbuka and tabla at an early age. He moved to Saudi Arabia for a time and learned traditional Bedouin music styles. In the 1970s he moved to London and began playing with saxophonist Andy Sheppard. His collaborations with jazz musicians earned him the nickname "The Sultan of Swing". In 1989 he worked with Peter Gabriel on the soundtrack to Martin Scorsese's The Last Temptation of Christ. This brought him to the attention of artists such as Frank Asher and the Gipsy Kings.

In 1994 he returned to his roots and formed a ten piece Egyptian ensemble that performed on the album No Quarter: Jimmy Page and Robert Plant Unledded. Ramzy and his ensemble also gained exposure by touring with Plant and Page throughout 1995 in support of their album. The next year Ramzy released the first of three collaborations with English arranger Phil Thornton, Eternal Egypt. The success of Eternal Egypt's blend of Arabic music prompted the follow up albums Immortal Egypt and Enchanted Egypt. In 1996, Hossam and his percussion section played with Big Country in Dingwalls club. From this event was recorded "Eclectic". In 1998, he performed with Rachid Taha, Khaled and Faudel at their 1,2,3 Soleils concert and backed Khaled again for the Claude Challe album Flying Carpet.

In 2000, Jay-Z sampled his version of "Khosara" for "Big Pimpin'". After 2000 Ramzy increasingly began to work arranging music for pop stars. In 2005 he arranged some songs for Ricky Martin's album Life and he worked with Shakira on her album She Wolf. He also contributed two songs to the soundtrack for the film Prince of Persia and one to the soundtrack for Conan The Barbarian.