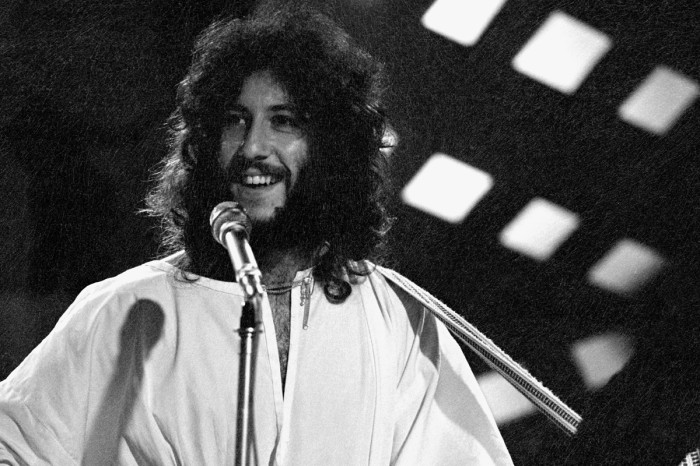 Peter Green (born Peter Allen Greenbaum; 29 October 1946 – 25 July 2020) was an English blues rock singer-songwriter and guitarist. As the founder of Fleetwood Mac, he was inducted into the Rock and…

Peter Green (born Peter Allen Greenbaum; 29 October 1946 – 25 July 2020) was an English blues rock singer-songwriter and guitarist. As the founder of Fleetwood Mac, he was inducted into the Rock and Roll Hall of Fame in 1998. Green's songs, such as "Albatross", "Black Magic Woman", "Oh Well", "The Green Manalishi (With the Two Prong Crown)" and "Man of the World", appeared on singles charts, and several have been adapted by a variety of musicians.

Green was a major figure in the "second great epoch" of the British blues movement. B.B. King commented, "He has the sweetest tone I ever heard; he was the only one who gave me the cold sweats." Eric Clapton praised his guitar playing; he was interested in expressing emotion in his songs, rather than showing off how fast he could play and used string bending, vibrato, and economy of style.

Rolling Stone ranked Green at number 58 in its list of the "100 Greatest Guitarists of All Time". His tone on the instrumental "The Super-Natural" was rated as one of the 50 greatest of all time by Guitar Player. In June 1996, Green was voted the third-best guitarist of all time in Mojo magazine.

Peter Allen Greenbaum was born in Bethnal Green, London, on 29 October 1946, into a Jewish family, the youngest of Joe and Ann Greenbaum's four children. His brother, Michael, taught him his first guitar chords and by the age of 11 Green was teaching himself. He began playing professionally by the age of 15, while working for a number of East London shipping companies. He first played bass guitar in a band called Bobby Dennis and the Dominoes, which performed pop chart covers and rock 'n' roll standards, including Shadows covers. He later stated that Hank Marvin was his guitar hero and he played The Shadows' song "Midnight" on the 1996 tribute album Twang. He went on to join a rhythm and blues outfit, the Muskrats, then a band called The Tridents in which he played bass. By Christmas 1965 Green was playing lead guitar in Peter Bardens' band "Peter B's Looners", where he met drummer Mick Fleetwood. It was with Peter B's Looners that he made his recording début with the single "If You Wanna Be Happy" with "Jodrell Blues" as a B-side. His recording of "If You Wanna Be Happy" was an instrumental cover of a song by Jimmy Soul.

In October 1965, before joining Bardens' group, Green had the opportunity to fill in for Eric Clapton in John Mayall & the Bluesbreakers for four gigs. Soon afterwards, when Clapton left the Bluesbreakers, Green became a full-time member of Mayall's band from July 1966.

Mike Vernon, a producer at Decca Records recalls Green's début with the Bluesbreakers:

As the band walked in the studio I noticed an amplifier which I never saw before, so I said to John Mayall, "Where's Eric Clapton?" Mayall answered, "He's not with us anymore, he left us a few weeks ago." I was in a shock of state [sic] but Mayall said, "Don't worry, we got someone better." I said, "Wait a minute, hang on a second, this is ridiculous. You've got someone better? Than Eric Clapton?" John said, "He might not be better now, but you wait, in a couple of years he's going to be the best." Then he introduced me to Peter Green.

Green made his recording debut with the Bluesbreakers in 1966 on the album A Hard Road (1967), which featured two of his own compositions, "The Same Way" and "The Supernatural". The latter was one of Green's first instrumentals, which would soon become a trademark. So proficient was he that his musician friends bestowed upon him the nickname "The Green God". In 1967, Green decided to form his own blues band and left the Bluesbreakers.

Green's new band, with former Bluesbreaker Mick Fleetwood on drums and Jeremy Spencer on guitar, was initially called "Peter Green's Fleetwood Mac featuring Jeremy Spencer". Bob Brunning was temporarily employed on bass guitar (Green's first choice, Bluesbreakers' bassist John McVie, was not yet ready to join the band). Within a month they played at the Windsor National Jazz and Blues Festival in August 1967 and were quickly signed to Mike Vernon's Blue Horizon label. Their repertoire consisted mainly of blues covers and originals, mostly written by Green, but some were written by slide guitarist Jeremy Spencer. The band's first single, Spencer's "I Believe My Time Ain't Long" with Green's "Rambling Pony" as a B-side, did not chart but their eponymous debut album made a significant impression, remaining in the British charts for over a year. By September 1967, John McVie had replaced Brunning.

Although classic blues covers and blues-styled originals remained prominent in the band's repertoire through this period, Green rapidly blossomed as a songwriter and contributed many successful original compositions from 1968 onwards. The songs chosen for single release showed Green's style gradually moving away from the group's blues roots into new musical territory. Their second studio album Mr. Wonderful was released in 1968 and continued the formula of the first album. In the same year they scored a hit with Green's "Black Magic Woman" (later covered by Santana), followed by the guitar instrumental "Albatross" (1969), which reached number one in the British singles charts. More hits written by Green followed, including "Oh Well", "Man of the World" (both 1969) and the ominous "The Green Manalishi" (1970). The double album Blues Jam in Chicago (1969) was recorded at the Chess Records Ter-Mar Studio in Chicago. There, under the joint supervision of Vernon and Marshall Chess, they recorded with some of their American blues heroes including Otis Spann, Big Walter Horton, Willie Dixon, J. T. Brown and Buddy Guy.

In 1969, after signing to Immediate Records for one single ("Man of the World", prior to that label's collapse) the group signed with Warner Bros. Records' Reprise Records label and recorded their third studio album Then Play On, prominently featuring the group's new third guitarist, 18-year-old Danny Kirwan. Green had first seen Kirwan in 1967 playing with his blues trio Boilerhouse, with Trevor Stevens on bass and Dave Terrey on drums. Green was impressed with Kirwan's playing and used the band as a support act for Fleetwood Mac before recruiting Kirwan to his own band in 1968 at the suggestion of Mick Fleetwood. Spencer, however, made virtually no contribution to Then Play On, owing to his reported refusal to play on any of Green's original material.

Beginning with "Man of the World"'s melancholy lyric, Green's bandmates began to notice changes in his state of mind. He was taking large doses of LSD, grew a beard and began to wear robes and a crucifix. Mick Fleetwood recalls Green becoming concerned about accumulating wealth: "I had conversations with Peter Green around that time and he was obsessive about us not making money, wanting us to give it all away. And I'd say, 'Well you can do it, I don't wanna do that, and that doesn't make me a bad person.'"

While touring Europe in late March 1970, Green took LSD at a party at a commune in Munich, an incident cited by Fleetwood Mac manager Clifford Davis as the crucial point in his mental decline. Communard Rainer Langhans mentions in his autobiography that he and Uschi Obermaier met Green in Munich, where they invited him to their Highfisch-Kommune. Fleetwood Mac roadie Dinky Dawson remembers that Green went to the party with another roadie, Dennis Keane, and that when Keane returned to the band's hotel to explain that Green would not leave the commune, Keane, Dawson and Mick Fleetwood travelled there to fetch him. By contrast, Green stated that he had fond memories of jamming at the commune when speaking in 2009: "I had a good play there, it was great, someone recorded it, they gave me a tape. There were people playing along, a few of us just fooling around and it was... yeah it was great." He told Jeremy Spencer at the time "That's the most spiritual music I've ever recorded in my life." After a final performance on 20 May 1970, Green left Fleetwood Mac.