'A Satisfied Mind'
by Porter Wagoner 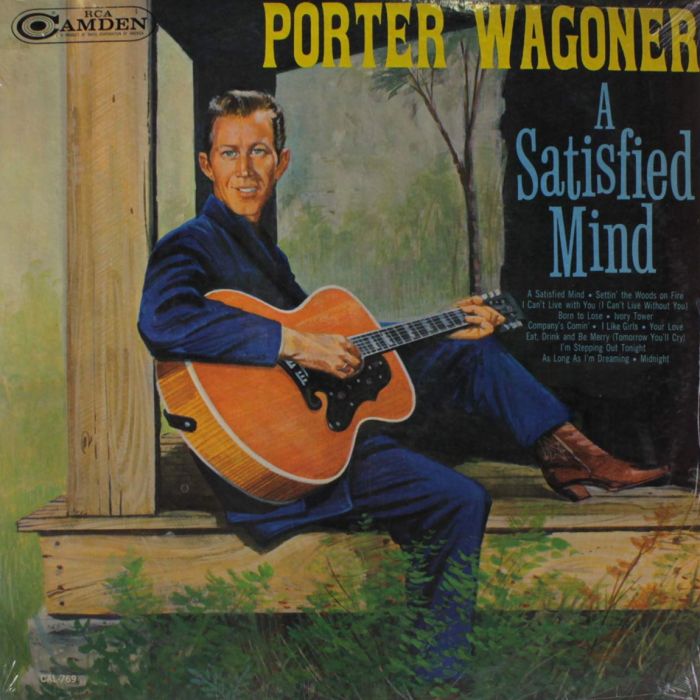 In 1967, he introduced singer Dolly Parton on his television show. She became part of a well-known vocal duo with him throughout the late 1960s and early 1970s.

Early life and career
Wagoner was born in West Plains, Missouri, the son of Bertha May (née Bridges) and Charles E. Wagoner, a farmer. His first band, the Blue Ridge Boys, performed on radio station KWPM-AM from a butcher shop in his native West Plains, where Wagoner cut meat. In 1951, he was hired by Si Siman as a performer on KWTO in Springfield, Missouri. This led to a contract with RCA Victor.

With lagging sales, Wagoner and his trio played schoolhouses for the gate proceeds; but in 1953 his song "Trademark" became a hit for Carl Smith, followed by a few hits of his own for RCA Victor. Starting in 1955, he was a featured performer on ABC-TV's Ozark Jubilee in Springfield. He often appeared on the show as part of the Porter Wagoner Trio with Don Warden and Speedy Haworth. Warden, on steel guitar, became Wagoner's long-time business manager. In 1957, Wagoner and Warden moved to Nashville, Tennessee, joining the Grand Ole Opry.