'Shake For Me'
by Howlin' Wolf 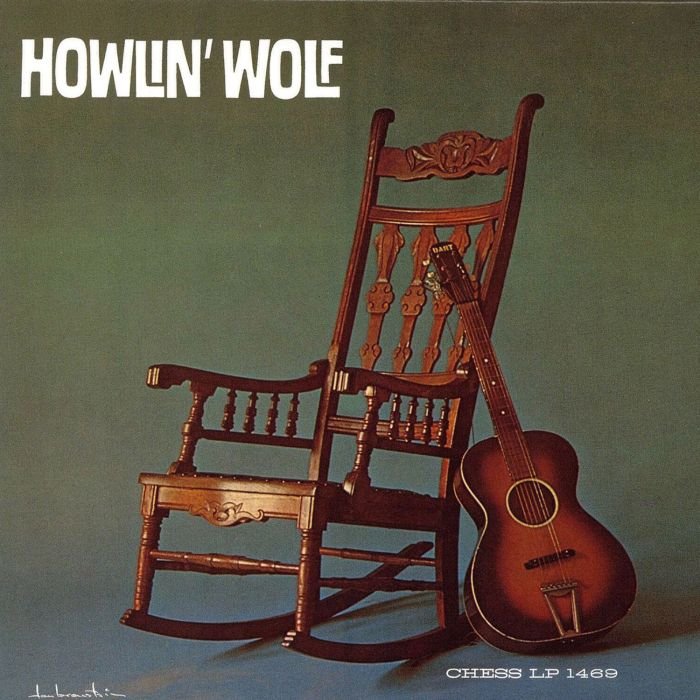 Chester Arthur Burnett (June 10, 1910 – January 10, 1976), known as Howlin' Wolf, was a Chicago blues singer, guitarist, and harmonica player. Originally from Mississippi, he moved to Chicago in adulthood and became successful, forming a rivalry with fellow bluesman Muddy Waters. With a booming voice and imposing physical presence, he is one of the best-known Chicago blues artists.

The musician and critic Cub Koda noted, "no one could match Howlin' Wolf for the singular ability to rock the house down to the foundation while simultaneously scaring its patrons out of its wits." Producer Sam Phillips recalled, "When I heard Howlin' Wolf, I said, 'This is for me. This is where the soul of man never dies.'" Several of his songs, including "Smokestack Lightnin'", "Killing Floor" and "Spoonful", have become blues and blues rock standards. In 2011, Rolling Stone magazine ranked him number 54 on its list of the "100 Greatest Artists of All Time".

1930s and 1940s
In 1930, Burnett met Charley Patton, the most popular bluesman in the Mississippi Delta at the time. He would listen to Patton play nightly from outside a nearby juke joint. There he remembered Patton playing "Pony Blues", "High Water Everywhere", "A Spoonful Blues", and "Banty Rooster Blues". The two became acquainted, and soon Patton was teaching him guitar. Burnett recalled that "the first piece I ever played in my life was ... a tune about hook up my pony and saddle up my black mare"—Patton's "Pony Blues". He also learned about showmanship from Patton: "When he played his guitar, he would turn it over backwards and forwards, and throw it around over his shoulders, between his legs, throw it up in the sky". Burnett would perform the guitar tricks he learned from Patton for the rest of his life. He played with Patton often in small Delta communities.

Burnett was influenced by other popular blues performers of the time, including the Mississippi Sheiks, Blind Lemon Jefferson, Ma Rainey, Lonnie Johnson, Tampa Red, Blind Blake, and Tommy Johnson. Two of the earliest songs he mastered were Jefferson's "Match Box Blues" and Leroy Carr's "How Long, How Long Blues". The country singer Jimmie Rodgers was also an influence. Burnett tried to emulate Rodgers's "blue yodel" but found that his efforts sounded more like a growl or a howl: "I couldn't do no yodelin', so I turned to howlin'. And it's done me just fine". His harmonica playing was modeled after that of Sonny Boy Williamson II, who taught him how to play when Burnett moved to Parkin, Arkansas, in 1933.

During the 1930s, Burnett performed in the South as a solo performer and with numerous blues musicians, including Floyd Jones, Johnny Shines, Honeyboy Edwards, Sonny Boy Williamson II, Robert Johnson, Robert Lockwood, Jr., Willie Brown, Son House and Willie Johnson. By the end of the decade, he was a fixture in clubs, with a harmonica and an early electric guitar.

On April 9, 1941, he was inducted into the U.S. Army and was stationed at several bases around the country. Finding it difficult to adjust to military life, he was discharged on November 3, 1943. He returned to his family, who had recently moved near West Memphis, Arkansas, and helped with the farming while also performing, as he had done in the 1930s, with Floyd Jones and others. In 1948 he formed a band, which included the guitarists Willie Johnson and Matt "Guitar" Murphy, the harmonica player Junior Parker, a pianist remembered only as "Destruction" and the drummer Willie Steele. Radio station KWEM in West Memphis began broadcasting his live performances, and he occasionally sat in with Williamson on KFFA in Helena, Arkansas.

1950s
In 1951, Howlin' Wolf was discovered by A&R man Ike Turner who had him record several songs for both Sam Phillips at Sun Records (which licensed its recordings to Chess Records) and the Bihari brothers at Modern Records. Phillips praised his singing, saying, "God, what it would be worth on film to see the fervour in that man's face when he sang. His eyes would light up, you'd see the veins come out on his neck and, buddy, there was nothing on his mind but that song. He sang with his damn soul." Howlin' Wolf quickly became a local celebrity and began working with a band that included the guitarists Willie Johnson and Pat Hare. His first singles were issued by two different record companies in 1951: "How Many More Years" backed with "Moaning at Midnight", released by Chess Records, and "Riding in the Moonlight" backed with "Moaning at Midnight", released by RPM Records. Later, Leonard Chess was able to secure his contract, and Howlin' Wolf relocated to Chicago in 1952. There he assembled a new band and recruited the Chicagoan Jody Williams from Memphis Slim's band as his first guitarist. Within a year he had persuaded the guitarist Hubert Sumlin to leave Memphis and join him in Chicago; Sumlin's understated solos and surprisingly subtle phrasing perfectly complemented Burnett's huge voice. The lineup of the Howlin' Wolf band changed often over the years. He employed many different guitarists, both on recordings and in live performance, including Willie Johnson, Jody Williams, Lee Cooper, L.D. McGhee, Otis "Big Smokey" Smothers, his brother Little Smokey Smothers, Jimmy Rogers, Freddie Robinson, and Buddy Guy, among others. Burnett was able to attract some of the best musicians available because of his policy, unusual among bandleaders, of paying his musicians well and on time, even including unemployment insurance and Social Security contributions. With the exception of a couple of brief absences in the late 1950s, Sumlin remained a member of the band for the rest of Howlin' Wolf's career and is the guitarist most often associated with the Chicago Howlin' Wolf sound.

Howlin' Wolf had a series of hits with songs written by Willie Dixon, who had been hired by the Chess brothers in 1950 as a songwriter, and during that period the competition between Muddy Waters and Howlin' Wolf was intense. Dixon reported "Every once in a while Wolf would mention the fact that, 'Hey man, you wrote that song for Muddy. How come you won't write me one like that?' But when you'd write for him he wouldn't like it." So, Dixon decided to use reverse psychology on him, by introducing the songs to Wolf as written for Muddy, thus inducing Wolf to accept them.

In the 1950s, Howlin' Wolf had five songs on the Billboard national R&B charts: "Moanin' at Midnight", "How Many More Years", "Who Will Be Next", "Smokestack Lightning", and "I Asked for Water (She Gave Me Gasoline)". His first LP, Moanin' in the Moonlight, was released in 1959. As was standard practice in that era, it was a collection of previously released singles.

1960s and 1970s
In the early 1960s, Howlin' Wolf recorded several songs that became his most famous, despite receiving no radio play: "Wang Dang Doodle", "Back Door Man", "Spoonful", "The Red Rooster" (later known as "Little Red Rooster"), "I Ain't Superstitious", "Goin' Down Slow", and "Killing Floor", many of which were written by Willie Dixon. Several became part of the repertoires of British and American rock groups, who further popularized them. Howlin' Wolf's second compilation album, Howlin' Wolf (often called "the rocking chair album", from its cover illustration), was released in 1962.

During the blues revival in the 1950s and 1960s, black blues musicians found a new audience among white youths, and Howlin' Wolf was among the first to capitalize on it. He toured Europe in 1964 as part of the American Folk Blues Festival, produced by the German promoters Horst Lippmann and Fritz Rau. In 1965, he appeared on the popular television program Shindig! at the insistence of the Rolling Stones, whose recording of "Little Red Rooster" had reached number one in the UK in 1964. In the late 1960s and early 1970s, Howlin' Wolf recorded albums with others, including The Super Super Blues Band, with Bo Diddley and Muddy Waters; The Howlin' Wolf Album, with psychedelic rock and free-jazz musicians like Gene Barge, Pete Cosey, Roland Faulkner, Morris Jennings, Louis Satterfield, Charles Stepney and Phil Upchurch; and The London Howlin' Wolf Sessions, accompanied by the British rock musicians Eric Clapton, Steve Winwood, Ian Stewart, Bill Wyman, Charlie Watts and others.

The Howlin' Wolf Album, like rival bluesman Muddy Waters's album Electric Mud, was designed to appeal to the hippie audience. The album had an attention-getting cover: large black letters on a white background proclaiming "This is Howlin' Wolf's new album. He doesn't like it. He didn't like his electric guitar at first either." The album cover may have contributed to its poor sales. Chess co-founder Leonard Chess admitted that the cover was a bad idea, saying, "I guess negativity isn't a good way to sell records. Who wants to hear that a musician doesn't like his own music?"

Wolf's last album was 1973's The Back Door Wolf. Entirely composed of new material, it was recorded with musicians who regularly backed him on stage, including Hubert Sumlin, Detroit Junior, Andrew "Blueblood" McMahon, Chico Chism, Lafayette "Shorty" Gilbert and the bandleader Eddie Shaw. The album is shorter (a little more than 35 minutes) than any other he recorded, as a result of his declining health. 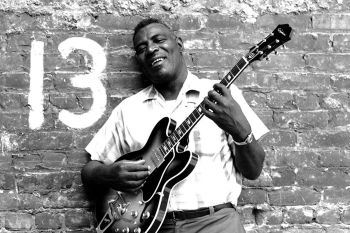 Are you enjoying “Shake For Me” by Howlin' Wolf?